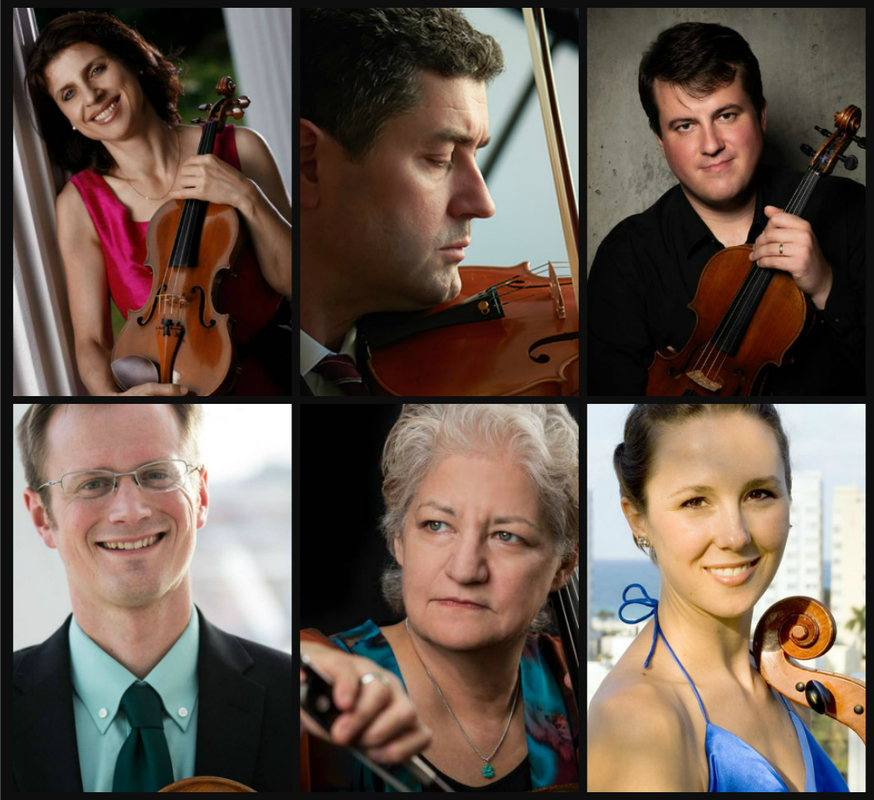 Musician Bios
Violinist CARMIT ZORI is the recipient of a Leventritt Foundation Award, a Pro Musicis International Award, and the top prize in the Walter W. Naumburg International Violin Competition. She has appeared as a soloist with the New York Philharmonic, the Rochester Philharmonic, and the Philadelphia Orchestra, among many others, and has given solo recitals at Lincoln Center, the Los Angeles County Museum of Art, the Isabella Stewart Gardner Museum in Boston, the Phillips Collection in Washington D.C., the Tel Aviv Museum and the Jerusalem Center for the Performing Arts. Her performances have taken her throughout Latin America and Europe, as well as Israel, Japan, Taiwan and Australia, where she premiered the Violin Concerto by Marc Neikrug.

Ms. Zori has played for Music for Food, a concert series that helps relieve food insecurity in cities all over the United States. She has also participated in Project: Music Heals Us, a nonprofit organization that aims to educate and heal marginalized communities through music. Carmit is also a member of the Israeli Chamber Project, an ensemble that performs chamber music and conducts educational outreach in the US, Israel, and various other countries throughout the world.

Ms. Zori can be heard on the Arabesque, Koch International, and Elektra-Nonesuch labels. She is professor of violin at Rutgers University and SUNY-Purchase.

At the behest of violinists Alexander Schneider and Isaac Stern, Ms. Zori came to the United States from her native Israel at the age of fifteen to study at the Curtis Institute of Music with Ivan Galamian, Jaime Laredo and Arnold Steinhardt.
GEORGY VALTCHEV (violin) has appeared as soloist, recitalist, and chamber musician throughout the United States, Europe, and Asia. Originally from Plovdiv, Bulgaria, he came to the United States in 1992 as a scholarship student of Dorothy Delay and Masao Kawasaki at The Juilliard School, where he ultimately earned his bachelor’s and master’s degrees. He has been heard as soloist with orchestras in Bangor, Baton Rouge, Boston, Chicago, Dallas, Miami, New York, New Jersey, in his native Bulgaria, and throughout Japan. Since 2011, Valtchev has been a Guest Concertmaster of the London Philharmonic Orchestra. As a chamber musician, he has appeared in New York’s Carnegie Hall, Alice Tully Hall, 92nd Street Y, Kennedy Center in Washington, D.C., Chicago’s Cultural Center, the Royal Carre Theatre in Amsterdam, the Barbican Centre in London, and China’s Guangzhou Opera House. He has been featured in international music festivals such as Mostly Mozart at Lincoln Center, Beethoven Festival at Bard College, Sofia Music Weeks, Varna Summer and Appolonia in Bulgaria, and Bastad Chamber Music Festival in Sweden. Valtchev is a founding member of Bulgarian Concert Evenings in New York.

Violist WIILLIAM FRAMPTON has been praised by critics for his “impressive” performances (The New York Times) and “a glowing amber tone” (The Boston Globe). Since his New York recital debut in 2009 at Carnegie Hall’s Weill Recital Hall, William has enjoyed a career of diverse performances around the world as a chamber musician, soloist, orchestral player, and teacher. Recent highlights include over 100 performances with a string quartet led by Midori Goto in tours of Asia and North America, numerous appearances as principal viola with the American Symphony Orchestra, appearances as guest artist with the Johannes Quartet, and world premieres of chamber music by J. Mark Stambaugh and a concerto by Peter Homans. He can be heard frequently in the broadway orchestras of Hamilton, Wicked, and The Lion King, and on film scores including The Joker, The Greatest Showman, The Girl on the Train, and many others.
Pandemic era projects have included outdoor concerts in New York and New Jersey with colleagues from American Symphony Orchestra (featured on the Media page) and an upcoming video concert project which will be posted regularly on this website and social media, and www.vintagesessions.us

William is the Artistic Director of Music at Bunker Hill, which he co-founded in 2008. He has performed at festivals including Bard Summerscape, Verbier, and IMS Prussia Cove, and as soloist with conductors Joseph Silverstein and David Hoose. He holds degrees from New England Conservatory and the Juilliard School, and studied with Kim Kashkashian, Samuel Rhodes, Choong-Jin Chang, and Byrnina Socolofsky. William teaches viola and chamber music at Queens College, CUNY.

PHILIP KRAMP enjoys a diverse career as an orchestral and chamber player. He is currently a violist with the Kansas City Symphony. Prior to that he was an active freelancer in New York City. He played regularly with the Mark Morris Dance Group, New York Philharmonic and Philadelphia Orchestra. As a chamber musician he has played at the Marlboro, Yellow Barn and Ravinia festivals, where he collaborated with members of the Guarneri and Juilliard String Quartets. He studied at the Curtis Institute and the New England Conservatory. Originally from Bloomington, IL, Philip graduated in 2009 from the Curtis Institute of Music in Philadelphia where he studied with Joseph DePasquale and Michael Tree. Philip studied chamber music with Steve Tenenbom, Pamela Frank and members of the Guarneri String Quartet.

MARCY ROSEN has established herself as one of the most important and respected artists of our day. Los Angeles Times music critic Herbert Glass has called her "one of the intimate art's abiding treasures." She has performed in recital and with orchestra throughout Canada, England, France, Japan, Italy, Switzerland, and all fifty of the United States. She made her concerto debut with the Philadelphia Orchestra at the age of eighteen and has since appeared with such noted orchestras as the Dallas Symphony, the Phoenix Symphony, the Caramoor Festival Orchestra, the Orpheus Chamber Orchestra in Carnegie Hall, the Jupiter Symphony and Concordia Chamber Orchestra at Alice Tully Hall, and the Tokyo Symphony at the famed Orchard Hall in Tokyo. In recital she has appeared in New York at such acclaimed venues as Carnegie Hall, the 92nd Street "Y" and Merkin Concert Hall; in Washington D.C. at the Kennedy Center, Dumbarton Oaks, the Phillips Collection and the Corcoran Gallery, where for many years she hosted a series entitled "Marcy Rosen and Friends." In recent seasons she has given Master Classes and appeared on stage in Beijing and Shanghai, China, the Seoul Arts Center in Korea and in Cartagena, Colombia.
A consummate soloist, Ms. Rosen's superb musicianship is enhanced by her many chamber music activities. She has collaborated with the world's finest musicians including Leon Fleisher, Richard Goode, Andras Schiff, Peter Serkin, Mitsuko Uchida, Isaac Stern, Robert Mann, Sandor Vegh, Kim Kashkashian, Jessye Norman, Lucy Shelton, Charles Neidich and the Juilliard, Emerson, and Orion Quartets. She is a founding member of the ensemble La Fenice, a group comprised of Oboe, Piano and String Trio, as well as a founding member of the world renowned Mendelssohn String Quartet. With the Mendelssohn String Quartet she was Artist-in-Residence at the North Carolina School of the Arts and for nine years served as Blodgett-Artist-in Residence at Harvard University. The Quartet which disbanded in January of 2010, toured annually throughout the United States, Canada and Europe for 31 years.

She performs regularly at festivals both here and abroad, including the Caramoor, Santa Fe, Ravinia, Saratoga and Bridgehampton Chamber Music Festivals, the Seattle International Music Festival, the Lockenhaus Kammermusikfest in Austria and the International Musicians Seminar in England. Since 1986 she has been Artistic Director of the Chesapeake Chamber Music Festival in Maryland and as a long time participant at the Marlboro Music Festival she has taken part in twenty-one of their "Musicians from Marlboro" tours and performed in concerts celebrating the 40th and 50th and 60th Anniversaries of the Festival.

The recipient of many awards and prizes, Marcy Rosen twice won the Young Concert Artists International Auditions, in 1981 with the Mendelssohn String Quartet and again in 1986, as a soloist. She was further honored by YCA with the Walker Fund Prize and the Mortimer Levitt Career Development Award. She is also the winner of the Washington International Competition for Strings and was the first recipient of the Mischa Schneider Memorial Award from the Walter W. Naumburg Foundation.

Marcy Rosen was born in Phoenix, Arizona and her teachers have included Gordon Epperson, Orlando Cole, Marcus Adeney, Felix Galimir, Karen Tuttle and Sandor Vegh. She is a graduate of the Curtis Institute of Music. Ms. Rosen is currently Professor of Cello at the Aaron Copland School of Music at Queens College and on the Faculty at the Mannes College of Music in New York City. She has also served on the faculties of the North Carolina School of the Arts, the Eastman School of Music, the New England Conservatory and the University of Delaware.

Her performances can be heard on recordings from the BIS, Bridge. Deutsche Grammophon, Sony Classical, CBS Masterworks, Musical Heritage Society, Phillips, Nonesuch, Pro Arte, and Koch labels among others.

Cellist CARRIE BEAN STUTE lives in Washington, DC, where she is assistant principal cellist of “The President’s Own” Marine Chamber Orchestra and performs chamber music in such diverse settings as the White House, State Department, and in public schools. She is co-founder and co-artistic director of the Chiarina Chamber Players, a DC-based series that has won local acclaim for its artistry and innovative programming. Chiarina is recipient of a 2020 Classical Commissioning grant from Chamber Music America.

In 2021 Carrie performed as soloist in the North American premiere of Pēteris Vasks’s Cello Concerto No. 2. A performer who seeks out the voices of today, she collaborates with a growing set of composers, and took part in in the Carnegie Hall workshop “New Voices, New Music” as a member of Hotel Elefant. She has performed at such venues as the Phillips Collection, Zankel Hall, Le Poisson Rouge, Roulette, and an in-house educational residency at the 92nd Street Y.

Carrie was a fellow at the New World Symphony, Tanglewood Music Center, and the Norfolk and Sarasota chamber music festivals. She holds degrees from the Eastman School of Music, Indiana University, and the CUNY Graduate Center. Carrie has taught at such institutions as Queens College, the DC Youth Orchestra Program, Harlem Opus 118, and at music festivals in Colombia and Honduras.